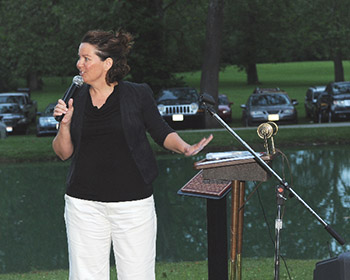 During Memorial Day weekend, Ferncliff Cemetery, Arboretum and Crematory paid tribute to deceased military and all who have died. Ceremonies and activities brought together families, community members, military and religious dignitaries as well as government officials.

During Sunday’s fifth annual Floating Lantern Ceremony, families inscribed personal messages to their deceased loved ones on candle lanterns, and when night fell they released them onto the pond on the grounds of Ferncliff. Inspirational words were shared by Mandy Sanders, Associate Pastor of New Hope Church in Springfield, and participants had time to remember and reflect. Although families and friends were acknowledging loved ones no longer with them, the atmosphere was one of celebration. Refreshments were served and raffle prizes awarded including a TV and a girl’s and a boy’s bicycle.

A parade marked Memorial Day, followed by Clark County’s Veterans’ Honor Service at the War Memorial on the grounds of Ferncliff. The cemetery is the final resting place of more than 5,000 military, dating back to 1863, and has been a longstanding advocate of veterans and host of the honor service. Chaplin Jim Stewart, Jon Stewart of the Clark County Veterans Council and Springfield mayor Warren Copeland addressed the crowd. H. Eugene (Doak) Walker, Detachment 963 of the Marine Corps League, posted and retired the Colors.

“Ferncliff is honored to pay tribute to fallen military service men and women who sacrificed so much for our country,” remarked Stan Spitler, Ferncliff Superintendent.

The Superintendent also provided an update on Ferncliff’s House of Reflections, scheduled to open later this summer. The building, formerly the Superintendent’s House, circa 1890, is being converted to accommodate 368 glass-fronted indoor niches where family and friends of loved ones can privately reflect in comfortable, updated, tranquil surroundings.