Barrett In Our Hearts, All The Time 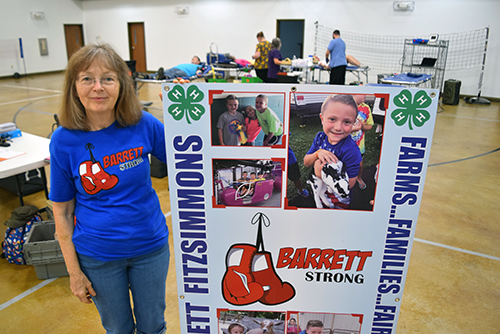 Blood drive volunteer Jean Grumbling spoke for the community as she wore a bright red “Barrett Strong” t-shirt and placed her hand on her chest. “Barrett’s in our hearts all the time,” said Jean.

Barrett was diagnosed with cancer at age six. He fought a three-year battle against the disease and had completed third grade at Northwestern Elementary School before his death in May 2019.

“Barrett Strong!” support from his church and community included three Community Blood Center blood drives as he fought cancer, and since his death three memorial blood drives, including during the pandemic.

“He fought it for four years,” said Jean, whose own heart has been heavy during the pandemic. In the last year and a half, she survived a heart attack, COVID-19 infection, and recent heart surgery. She marveled at Barrett’s strength.

“He’d be in the hospital,” she said, “Then he’d be running down the halls like nothing was wrong with him. We were all fighting with him, keeping him strong.”

“He was a good little boy,” said donor Helen Webb. “He sure was!” agreed fellow donor Richard Dean.

“We did well last year, even with COVID,” said Lee. “Our minimum is 24 donors and everything over that is a bonus. It’s for the family, and for everybody that needs blood. Barrett benefitted from it and so did other people.”

Lee is committed to continuing the “Barret Strong” blood drive each summer, when demand for blood is high, and when Barrett is remembered most.

“It’s good to continue, and good to remember his birthday,” said Lee. “His birthday is July 29. He would have been 12. We know it’s a hard time for the family.”