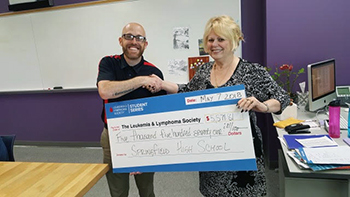 Springfield High School students are proud to have donated $5,571.81 to the Central Ohio Leukemia and Lymphoma Society (LLS), after a Pennies for Patients Campaign that officially began in February of this year. LLS is an organization that is committed to and has made huge strides in the fight against childhood cancer.

The donation to LLS was the leading high school contribution of the Chapter—earning the position of first place out of the 34 high schools in the area who participated.

This was the third year in a row that Springfield has won the coveted title. Ms. Eva M. Lazear, Coordinator for the SHS Student Series Campaign and Kiwanian Advisor to Key Club, stated that she was “not willing to accept anything less than First Place,” after winning the title for the last two years.

Ms. Lazear had promised her 30-member Key Club students that she would come to school with blue hair, if Springfield High School took the first place position again. Fulfilling her promise, she appeared in school May 8 with brightly colored blue hair.